Virtual machines (VM) are sometimes utilized by DW Support to test and reproduce customer scenarios, particularly because it is easier to create multiple virtual machines on a single computer as opposed to having to build several real-life, physical computers for the same task.

This article will outline virtual machines testing that has been performed to define DW Spectrum® IPVMS support limitations in a virtual environment.  Additionally, early VM cloning recommendations are included as well.

**NOTE:  When cloning a DW Spectrum® Server (even in a virtual environment), no two systems can have the same Hardware ID (HWID).  Duplication of an HWID can cause licensing issues for both DW Spectrum® IPVMS and possibly the system as well.

Recommended settings are difficult to establish for a virtual machine (VM) due to the large variety of setups that exist for DW Spectrum® systems such as the number of cameras, event rules, applications, third-party integrations, and virtual manager options.  As so, it may be beneficial to consider a headless system to conserve system resources.

The two VM operating systems utilized for DW Spectrum® IPVMS are Ubuntu and Windows.  The following systems were used by our developers to test such a setup:

The following resources were allocated for the VM:

In the test environment, there were 24 Full-HD streams, actively running at 25 fps, and overseeing a public road.  The DW Spectrum® Client was assigned to use an open layout and the VM that was running the Server application showed an average CPU utilization of ~22% and a 15% RAM load.

Overall, the results were reportedly stable and performed as intended. However, results may vary for others, depending on the hardware that is used.  In general, the more resources that are allocated from the actual hardware for a VM, the better the results will be for the VM.

By using a virtualization manager, identical copies (clones) of the source virtual machine (VM) can be created to easily deploy large environments on a single host machine.  However, when a VM is cloned an identical copy is made, including the Hardware ID (HWID) of the source VM.  Because HWIDs must be unique, having two identical systems with the same HWID will create licensing issues as they are bound to systems by that unique identifier.

To prevent a duplicate HWID issue in a virtual environment:

After creating the template VM, perform the following for Windows OS:

Alternatively, you can simultaneously press the Window+R keys (

) on the keyboard and to launch the Run program. 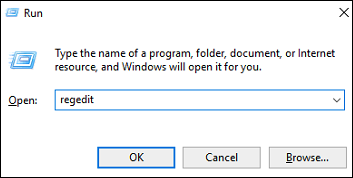 From the left-pane, navigate to:

After creating the template VM, perform the following for Ubuntu OS:

Alternatively, you can simultaneously press the Ctrl+Alt+T keys on the keyboard to launch the Terminal program.

Enter the following command to change the current directory:

**NOTE:  If you are using a DW Blackjack setup as a template, the default system password is “Dw5pectrum”. Older DW Blackjack units that were purchased prior to June 18, 2021 previously used the default login "admin/admin".

Enter “Y” to say “yes” and save the changes.

Shut down the Virtual Machine to prepare for cloning.

Be sure to shut down the VM before using it as a source of cloning.

Do not start the VM before cloning, otherwise the serverGuid and guidIsHWID will need to be configured again.

When cloning the VM, make sure to generate a NEW MAC address for each clone.  In doing so, each clone will have a unique MAC address and a unique HWID associated with it, preventing license conflicts.

**NOTE:  As it may still be possible that identical MAC addresses can be generated, it will be good practice to keep a list of the registered MAC addresses and Hardware IDs (HWIDs) of each VM, especially when deploying multiple virtual machines.

Virtual Machines do not run GUI (Graphical User Interface) based tasks as well as they are able to run host services/daemons due to additional processing loads that are applied to the CPU software rendering.

When running DW Spectrum Client on a VM, be sure that the any guest VMs that will be connecting to the host is also using OpenGL 2.1 or newer and has 3D Acceleration enabled in the VM settings.

**NOTE:  The resulting performance will vary, depending on the virtualization manager that is being used for the simulation.  It may not be an accurate representation of a real-hardware DW Spectrum® Server.

The following virtualization managers have been tested for DW Spectrum® IPVMS support when installed on a supported Operating System:

The following virtualization managers have been tested for DW Spectrum® IPVMS support and are NOT recommended for use:

**NOTE:  Please be aware that each virtualization manager is NOT tested with each DW Spectrum® IPVMS software release or patch as providing support for virtualization managers and other third-party products is outside of DW Support’s area of responsibility.  It is the responsibility of the user to verify compatibility with their security installation company or product distributor.