How Secure is DW Spectrum?

How Secure Is DW Spectrum®?

Occasionally, our Sales and Support teams will be asked how DW Spectrum® is kept secure.  With the assumption that an attacker is intimately familiar with how the DW Spectrum® IPVMS platform operates, Digital Watchdog (DW) takes steps to include code reviews and automated testing to ensure that there are no known encryption keys, backdoors, or hidden hacks in our code.  This ensures that the security of a system is as secure as the user makes it.

This article will describe our security philosophy and how DW ensure that DW Spectrum® is as safe as possible from nefarious intervention.

Note:  It is recommended to consult with a Network Security professional if additional network and data protection beyond the services that is utilized by DW Spectrum® IPVMS is needed.

What Data Is Encrypted in DW Spectrum®?

What Encryption Technologies Are Used in DW Spectrum®?

The following encryption technologies are used:

Why Are Some Connections Not Enabled By Default?

As much as Digital Watchdog strives to maintain secure connections between the DW Spectrum Server by default, the consumption of processing resources of the computer that hosts the DW Spectrum Server program is taken into consideration.  For example, enabling the Encrypt video traffic security option increases the CPU usage of that computer and can create processing issues if the hardware is not sufficient or is already being used for additional purposes.

Related:  Using A DW Spectrum Server As A Client 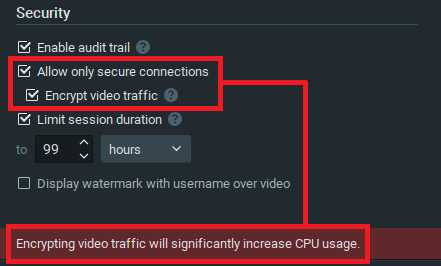 The default security settings vary depending on the component that is being accessed (⮀  - signifies a connection between the two denoted components).

Email Server options include TLS (Transport Layer Security) as the default option to protect Internet communication by creating a secure connection by encrypting the communication that is transmitted between a DW Spectrum Server and its clients. 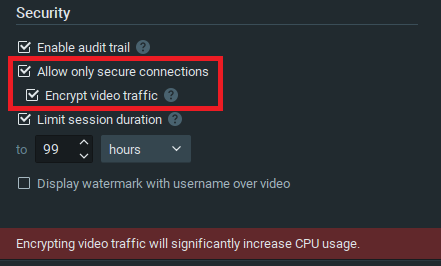 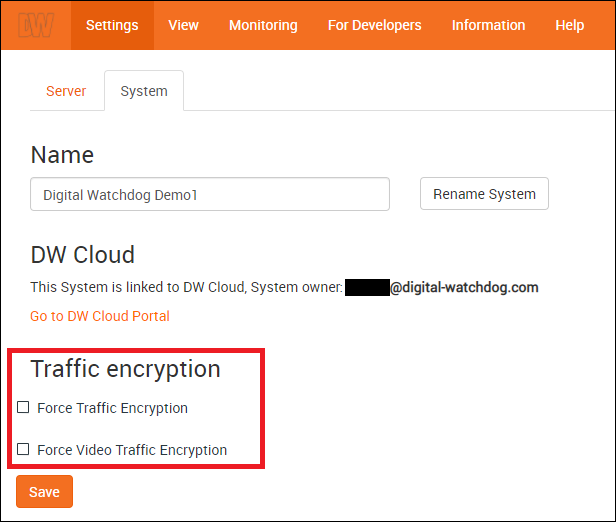 To enable the optional encryption options through an instance of the DW Spectrum® Client: 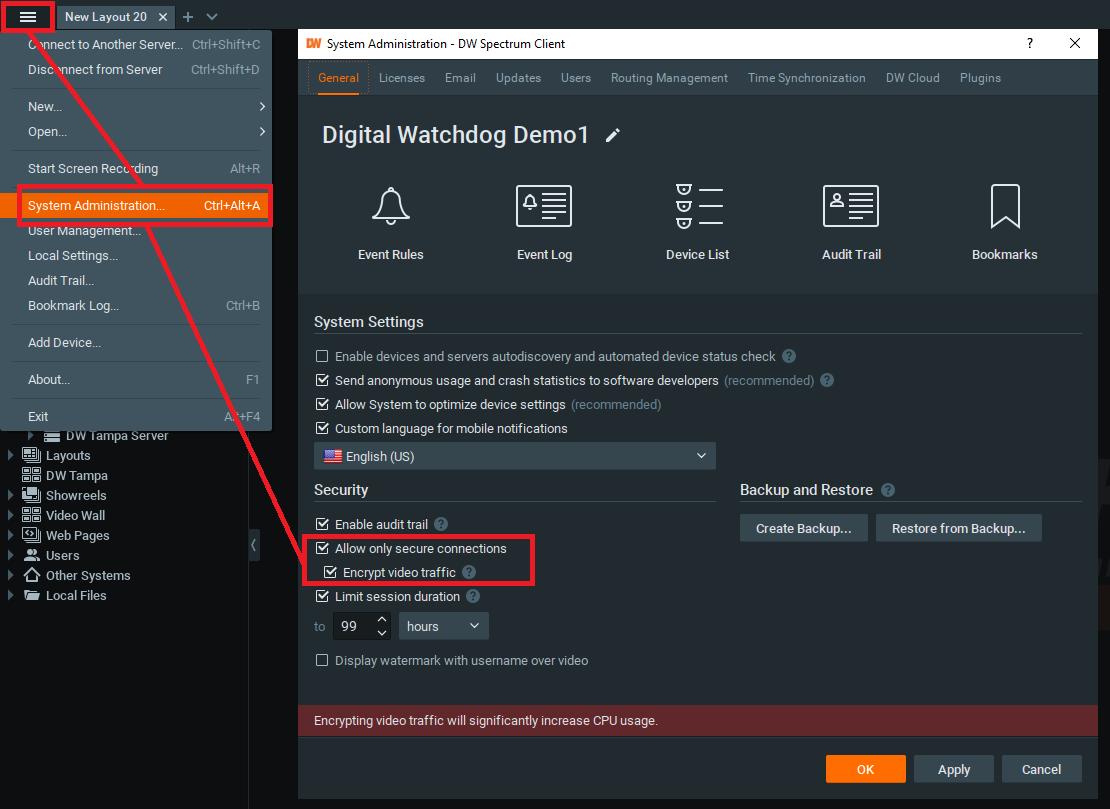 Digital Watchdog uses the OpenSSL library whenever something needs to be encrypted.  Although the DW Spectrum® Server can utilize all of the hash algorithms that OpenSSL is capable of, we disable deprecated and insecure protocols that have known security vulnerabilities (such RC4 and 3DES ciphers).  The Transport Layer Security (TLS) protocol aims to provide privacy and data integrity between two communicating computer applications.

The default OpenSSL cipher setting “High:!RC4:!3DES” is used, but the cipher can be changed manually to be even more secure.  We support TSL1.2 by default, but other options can be enabled by modifying the parameter “allowedSslVersions”.

There are two summary panels, Sessions and Cameras, with a related Details panel to the right.  Use these tabs to navigate viewing between the summary of activities during a user’s session (Sessions) and of the devices that were used (Cameras).

The Event Log displays system events that have occurred within DW Spectrum®.  This can be utilized to search through past system activity to diagnose device or server issues.

Use the Event Log to view occurrences of default and custom system events (Event Rules). 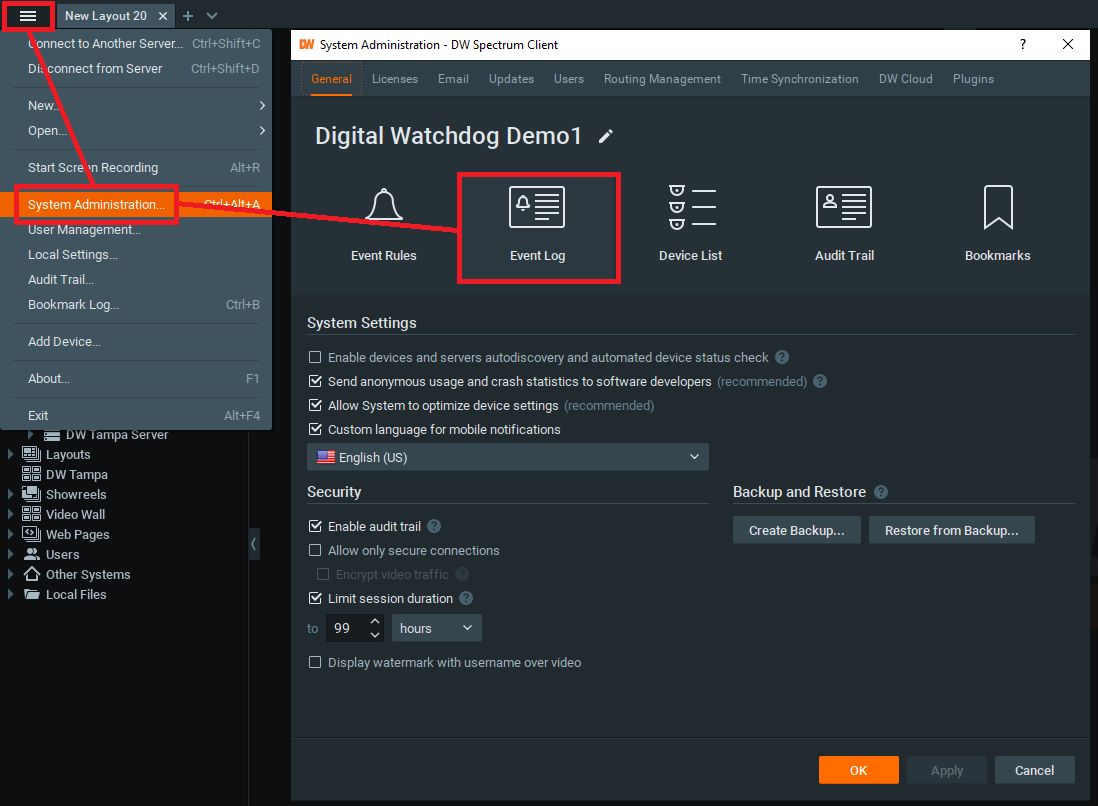