Since its initial release, the VMAX A1 Series (2.1 MP) has since been improved upon and now features a second generation model as well.  However, a common issue with the first generation VMAX A1 is that when connected cameras are using different video signals and are not organized by signal type, video loss will occur, affecting the archived video as well.

This article will outline how to organize the camera BNC connections for a first generation VMAX A1 (2.1 MP) recording unit to avoid video signal conflicts.

Note:  This article focuses on camera connection setup with the first generation of the VMAX A1 analog recording unit.  You can determine if you are using a First Generation (VAH) or Second Generation (HDR) unit by inspecting the first three letters of the Serial Number, located on the sticker, on top of the DVR.

When connecting cameras to a first generation VMAX A1 DVR, you will need to consider the video type that the camera is using.

In order to prevent video loss within the DVR, the BNC connections of the cameras to the DVR must be organized by video type.

When looking at the back of the VMAX A1, imagine that the BNC connectors are grouped into ‘blocks’ of four (4) BNC connectors. As long as the cameras in each group of four are using the same signal type, video will display.

For example, in images Example 1 and Example 2 below, the connected cameras are all using the same signal type, resulting in successfully displayed video.

In image Example 3, the connected cameras are using two different video types, but are grouped into ‘blocks’ of four, so that each group is comprised of the same video type. However, if you were to mix an AHD camera in with the TVI camera group, there would be video display issues. 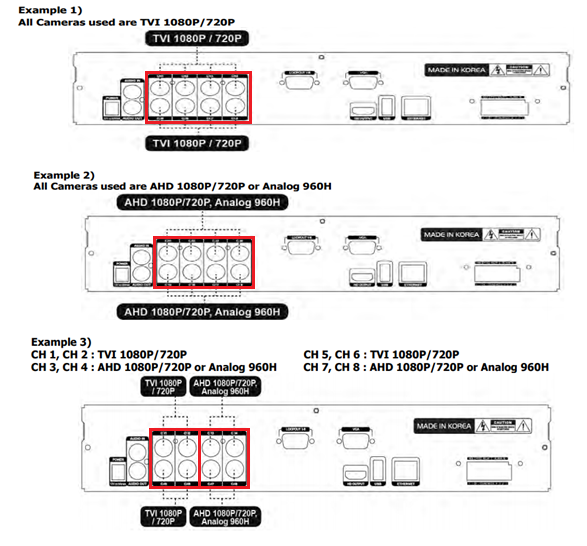 It is worth noting that rather than having to figure out how to organize a camera into a group, you may be able to change the camera’s video signal instead, depending on the camera model.  This may be particularly useful if the new camera is not using the same signal as the cameras that are already grouped together.