A Generic Event occurs when the server receives an HTTP request from an external system such as an alarm, access control device, or a monitoring system. This is a default event and allows commands to be sent from DW Spectrum to third-party systems such as pdk.io.

DW Spectrum allows pdk.io devices to send an HTTP string known as a CreateEvent API call. The CreateEvent request must follow the proper format in order to be read by the server. In addition, the event fields in the rule must match the corresponding fields in the HTTP request to be acted upon. The full server API documentation is accessed on any installed server from:

NOTE: Values in the Event field are case-sensitive, and an empty string functions as a wildcard, where any value is considered a match.

When a Generic Event is created in the DW Spectrum System, there are three basic parameters associated with each event; each HTTP request contains these three parameter data pieces: the Source, Caption, and Description.

These three data events are searched and filtered by the DW System. This can be leveraged in the Bookmark Log (Ctrl-B) when bookmarks are created from events, and when creating Event Rules (Ctrl-E).

The resource that initiates the event: device (motion detection, input signal, etc.) or server (storage failure, server failure, etc.). The source parameter of the Generic Event is the name of the device in the pdk.io system that generated the PDK io event.

Caption is an optional class value used to identify an object type. Entries in this field should match the corresponding field in the HTTP request and is case sensitive. If the field is empty, it will always be considered a match. The caption parameter of the Generic Event is determined by the corresponding pdk.io event type that was generated. This can be any of the following values:

Description is an optional attribute value used to distinguish objects within a class. Entries in this field should match the corresponding field in the HTTP request and is case sensitive. The description parameter of the Generic Event is the same text that is generated for the info text of the Live Events in pdk.io.

Metadata, strictly a DW Spectrum parameter and not defined in PDK.io, is used to pass a device identifier that will specify devices the event is limited to.

IMPORTANT: PDK does not define the Metadata parameter; the Force Acknowledgement option cannot be used when using the Show Notification action as part of a rule event.

IMPORTANT: If a continuous action such as “device recording” or “repeat sound” is bound to an instant Generic Event (one without a State field) the rule will not work.

After installing the NVR Integration Tool you will be able to trigger specific actions in pdk.io from the DW Spectrum interface using Event rules with the Soft Trigger Event and Do HTTP Request Action.

The parameters of the Do HTTP Request Action must be populated as shown below for the actions to complete successfully in pdk.io. 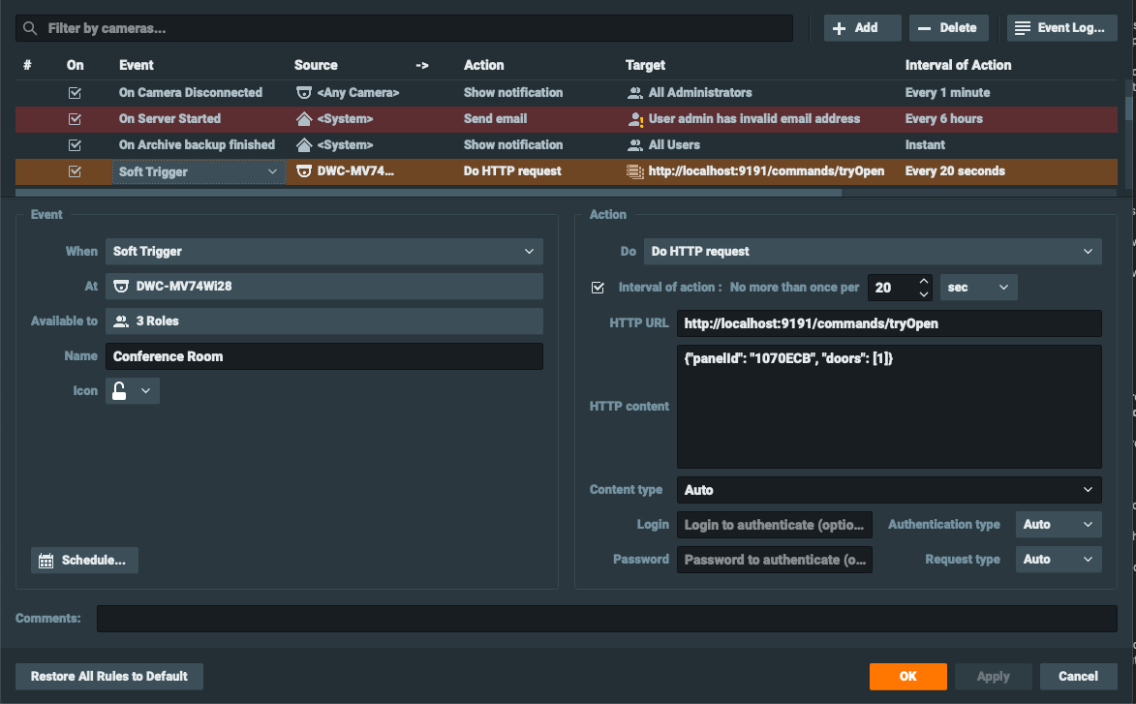 NOTE: Refer to the fields in the right-side Action panel above for an example of how the content should appear in each of the fields described below.

Do - Click on this field (or the Action panel in the list) to select from a menu of Actions.

Interval of action - Check this option to aggregate the number of times the action will be triggered. For No more than once per a given amount of time, or instance, enter an integer value (1 - 999) and select a time interval from the menu (seconds, minutes, hours, or days). If unchecked, the action is instant and will occur whenever the event is triggered.

HTTP URL - This is the HTTP link to the external system that will receive the request. It can also contain the request itself. The URL should be formatted as follows:

The {command-name} must be one of the following Command Names in the table below and the parameter /commands/ (as shown in the screen example above) precedes the command name(s) in the string of text. If more than one command name is used, each command name is separated by a comma (no spaces).

NOTE: The {command-name} is case sensitive and must be exactly as shown in this table.

as in the following:

Note the use and placement of colons ( : ) commas ( , ) and brackets [ ] and that each parameter is enclosed in “double-quotes” with {curly brackets} at each end of this HTTP content string of text.

{Device ID number(s)} - This is a comma-separated list of the Device IDs that you would like the action performed on (no spaces). If performing the action on a single device, no comma is needed. The Device ID is found by navigating to the device’s configuration screen in pdk.io and look in the browser URL bar. The number at the end is the Device ID.

The Device ID for this device is 1.

Authentication type - Must be left at Auto.

Request type - Must be left at Auto.

Click OK to accept the input changes for this screen.

It is possible to have multiple actions triggered in pdk.io using a single Soft Trigger Event. To do so in the Do HTTP Request Action, you will use the commands {command-name} in the HTTP URL and format the HTTP content similar to the following.

{command-name} -      This value is a comma-separated list of the Command Name options listed above that you would like to have triggered. Each command name is surrounded by double-quotes. Multiple commands can be used, separated by a comma (no spaces), and must be preceded by “commands” as illustrated here.

(This command string format would be entered in the HTTP content field.)